I'd like to put in a good word for Red Skelton. That would've been a silly thing to say just a couple of generations ago, when he was still one of America's best-loved comedians. But in the years since his show went off the air in 1971, his fame has slowly and quietly diminished--- not because his stuff is no longer funny, but because it's no longer easy to find.

Yes, he made some movies for M-G-M, and they turn up on TCM now and then. But Skelton's specialty was sketch comedy (preferably for live audiences), and the perfect medium for him was television. His show lasted twenty seasons, placing in Nielsen's Top Ten for nine of them. As late as 1969-70, it was still seventh in the ratings.

But Skelton's show was either aired live or shot on tape. Unlike I love Lucy or The Honeymooners' "Classic 39," it wasn't shot on film, which made it relatively unattractive for syndication. Skelton owned the rights to his shows, and he seems not to have been interested in syndication anyway.

In the years since his death, his estate has allowed a broad sampling of The Red Skelton Show to be released on video. Timeless Media/Shout Factory has issued several DVD collections, all of which are still in print. They're not bad, but they're a hodgepodge: the shows are edited (sometimes heavily), they're seldom in chronological order, you aren't given the broadcast dates, and there's often a giant "bug" in the lower right corner of the screen, to deter piracy.

Don't get me wrong. It's still good stuff. It's just not presented very well.

But now Timeless/Shout has released a brand new set, and this time they really did it right. The Red Skelton Show: The Early Years, 1951-1955 presents 92 episodes (plus an unaired dress rehearsal for one of them), mastered from rare kinescopes from the comedian's personal collection. While kinescopes can vary in image quality, the episodes I've watched so far all look great. You get the broadcast dates for each one (the earliest is from 10/21/51 and the latest is from 3/8/55). I don't believe any of these are available elsewhere.

The episodes are also complete, or very nearly so. It was a thirty-minute show during this period, and the episodes I've watched so far run 26-27 minutes. A plug for Tide detergent is embedded in the opening titles, and sometimes another plug is incorporated into a comedy sketch. There should also be a couple of regular commercials too, but evidently someone decided to edit them out of the DVD masters. Only obsessive history buffs (like me) will really miss them, though!

In the tradition of its earlier incarnation on radio, the televised Red Skelton Show was very lean in terms of guest stars... at first. But by the 1953-54 season, guest stars were popping up all over the place, and in this collection you'll find everyone from Jackie Gleason to John Wayne to Bela Lugosi to Peter Lorre to Martin & Lewis.

That leaves just one question, the one that really matters. Is this stuff funny, or just a relic? Well, it took me a long time to give Red a fair shake. I guessed that his material was basically the loud, broad, wacky kind of thing that Jerry Lewis did, and I'm not much of a Jerry Lewis fan. But then I put those expectations aside and began watching some Skelton shows, and I found them really enjoyable. There's slapstick, sure (and it works), but there's also some standup comedy and pantomime pieces. There's physical comedy and situation comedy, character-driven material and a dash of topical humor. What I enjoy most of all are his ad-libs, which are less cerebral than Fred Allen's but just as funny, and executed perfectly. Any time a supporting player steps on his line, or a prop misbehaves, you can bet Red will put things right with one fast wisecrack, and that it'll be both good-natured and hilarious. The man obviously loved his work, and he's a delight to watch.

So yes, The Red Skelton Show is a hell of a good program, and I recommend this collection. The others are good too, but this one's my favorite.

A good word for Red Skelton seconded, you really cannot judge his talents on the merits of his MGM movies alone. Television was indeed his medium, and it is good that his shows have gradually reappeared for all to see again. I haven't got this set, but it's on the Amazon wish list.

Hows the show with Lugosi?

As a young squirt I was an avid watcher of Skelton's show from the early, mid-Sixties right up to the time it when off the air. I recall it airing on Monday or Tuesday evenings. I mostly looked forward to the big silent pantomime sketch which usually closed the program, since that form of comedy was rapidly disappearing from the airwaves.
The VHS tapes were always annoying to me because they were rarely complete episodes. Will definitely check out Shouts DVD.
The folks at that company must have a good business plan as they continually put out niche product from the Golden TV Age and seem to make a profit, or else how can they afford to keep sending out new product?
Gary J.
http://www.facebook.com/profile.php?id=1783165551

We've all heard sad stories about Bela Lugosi's appearance on the Skelton show. They're told in some otherwise impressive books about him, and they're underlined by a painful scene in Tim Burton's Ed Wood, in which a confused, humiliated Bela struggles through a live TV comedy. All of this seems to have originated in Alex Gordon's recollections about Bela's Skelton appearance. But Gordon's memory failed him (for one thing, he mistakenly recalled Peter Lorre being in that show).

Now that the episode is available for viewing, the truth is plain to see: it's a blast! As a scripted comedy, it's a little less than top-notch, but it's a fun burlesque of horror movies, and the performers are having the most fun of all. Lampooning all those Monogram mad scientists he'd played in the past, Bela's performance is just fine and he gets quite a few laugh lines.

There's only a kernel of truth to the legend depicted in Ed Wood: near the end of the sketch, Bela forgets a line, kind of goes out of character and turns to Red for a cue, as if this was just another rehearsal instead of the live broadcast. Red really breaks up but then quickly carries on with the sketch. All of this happens in less time than it takes to tell, and it all comes off as just another moment of spontaneous fun. There's no awkwardness, and no one's humiliated. (If anything, Bela comes off better than Lon Chaney Jr., who mistakenly says one of Red's lines rather than his own, and who muffs a little bit of stage business later on.)

I can imagine Bela kicking himself for missing that line, but it really comes off as endearing more than anything else, and it's absolutely par for the course. Missed cues, mangled lines, and mistaken stage business are all over the place in vintage TV sketch comedy. Just today, I saw George Burns blush after blowing a punchline during a Dinah Shore Chevy Show appearance: he meant to say "Saks Fifth Avenue," and it came out as "Sex Fifth Avenue!"

Thats nice to hear about the Lugosi show, and i look forward to seeing it. Skelton was one of the few comics who was able to get laughs by laughing at himself, and yes, some of the best parts of the show were the breakups.

Speaking of Peter Lorre, here's the spoof of the HONEYMOONERS sketch he and Skelton do on the show with Vampira in the mid-50's.


Skelton does a great Ed Norton impression, but Lorre seems to be a bit out of it playing Ralph Kramden, and Vampira's total lack of comedy timing doesn't help. Too bad, it's a great idea for a sketch.

The other Skelton Show I've looked for for years was the 1968 show where Vincent Price and Boris Karloff appeared, it's one of Karloff's last appearances and, as I recall, it was a very funny show.

This sounds mouthwatering, Richard -- Karloff and Price having been a dream (comedy) team at AIP already. There are, at least, a couple stills, one in a Vincent Price blog: http://craiglgooh.blogspot.co.uk/2011/10/price-far-above-rubies.html and one in this Karloff gallery: http://www.pinterest.com/pixie886/boris-karloff/. I imagine this survives, but is just 'unavailable'?

Uli Ruedel wrote:This sounds mouthwatering, Richard -- Karloff and Price having been a dream (comedy) team at AIP already. There are, at least, a couple stills, one in a Vincent Price blog: http://craiglgooh.blogspot.co.uk/2011/10/price-far-above-rubies.html and one in this Karloff gallery: http://www.pinterest.com/pixie886/boris-karloff/. I imagine this survives, but is just 'unavailable'?

I have another pic from the show, a color rehearsal shot where they are all sitting in the golf cart made up as a hearse in their regular clothes, I'll see if I can get it somewhere where I can post it here.

Karloff made so many guest shots on TV that need to be turned up. I believe he did THE JONATHAN WINTERS SHOW after the Skelton show (that's another comedy-variety series that needs to come out on DVD, it was Winter's only hour-long Variety show that only lasted one season, but it was a funny show as well), and, of course, Karloffs final performance on THE NAME OF THE GAME in the episode THE WHITE BIRCH. Even when Karloff died, he had more movies come out posthumously than anyone else I can think of.

Here's the rehearsal pic of Messr's Karloff, Skelton, and Price (there's a law firm for you): 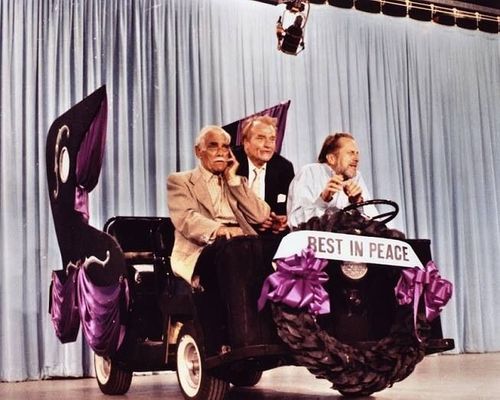 Put my order in this morning. I'll have it Sunday. Haven't seen any of those shows in years. I can hardly wait.
Post Reply
15 posts

Users browsing this forum: No registered users and 1 guest