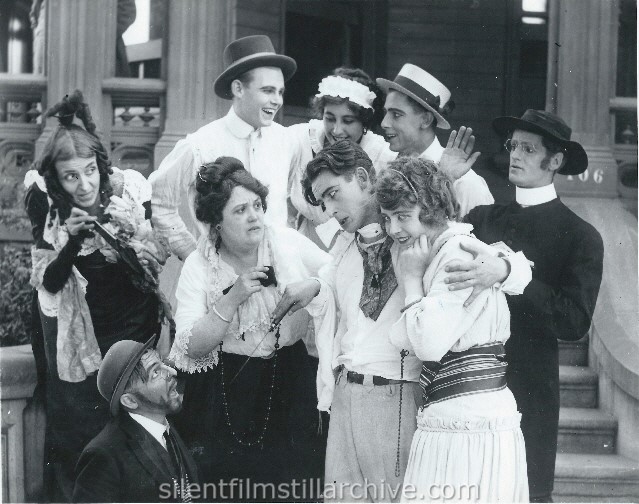 I'm sure RMR is going to ding me because I have not bought his Hal Roach book yet (I'll get to it eventually), and he almost certainly has more information on this film. This is a still I just acquired of The Hungry Actors (1915) a very early Rolin film with Harold Lloyd (grimacing at right) with his arm around Jane Novak, and Roy Stewart as the "parson". It looks like Bobby Vernon top-left-center in the dark hat. (There is nothing in Richard Ward's book or Annette Lloyd's Harold Lloyd Encyclopedia on this film.)

The IMDB also lists Neely Edwards, Martha Mattox and Violet MacMillan in the cast. Are iny of them in this photo?
Last edited by Bruce Calvert on Thu Apr 03, 2014 10:20 pm, edited 1 time in total.
Bruce Calvert
http://www.silentfilmstillarchive.com

Hi Bruce
Martha Maddox is the woman to the left with the bow (or whatever it is) in her hair. That's not Roy Stewart as the parson - it looks like a young Eddie Borden. Looks like Neely Edwards as the guy kneeling on the left in character make-up. Don't think that's Bobby Vernon at top. Wonderful photo.

If the fellow at the top in the dark hat was Bobby Vernon, he'd have to be standing on a box to be towering over the cast, that's Roy Stewart.

A neat still indeed, but what do you have that indicates that the title is THE HUNGRY ACTORS? This is most likely one of the early Rolin titles shot from January to March 1915 that we only have production numbers on. This is also most likely one of the films that were sold to/swiped by Sawyer Inc. for distribution or sold to the Motion Picture Specialty Company. Any press info on the back of the still?

BTW, if you keep dawdling on buying SMILEAGE GUARANTEED Bruce, you may be S.O.L., we're down to a very few copies and it will most likely go out of print after that.

Thanks Steve and Richard. I had my doubts about the "parson", but the IMDB listed Stewart in that role, and the actor is wearing some make up.

There's no press information on the back. Just writing from two different people.
Bruce Calvert
http://www.silentfilmstillarchive.com 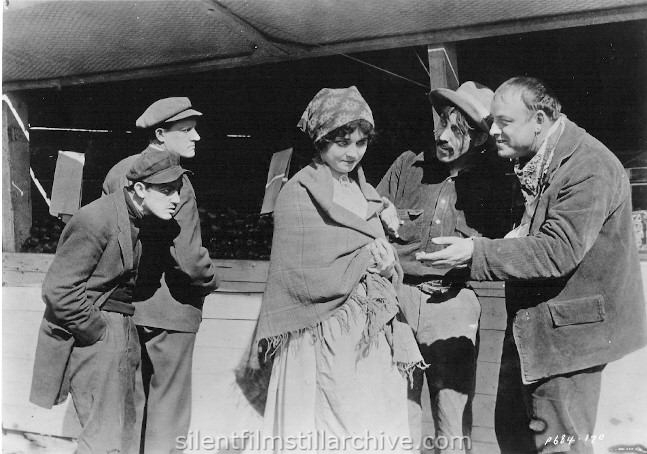 Here's a 1930s Paramount publicity photo of From Italy's Shores (1915), which was filmed at about the same time. Lloyd is the baddie at far left, Novak is center and Roy Stewart is at far right.
Bruce Calvert
http://www.silentfilmstillarchive.com

I did find a mention of this film on page 163 of Richard Ward's book. It just wasn't listed in the index.

Some sources have this film as Into the Light. I'm not sure, as here is the synopsis from silentera.com:

[The Universal Weekly, Volume VI, Number 24, 12 June 1915, page 19] Many a devious way is trod in life and when you see a film like “Into the Light” where a double-dyed burglar who is so hardened that he can, with the utmost equanimity, rob a woman while she she is reading to him out of the Bible, it is not safe to say that it is improbable. Besides he later becomes a parson, and, in spite of temptation which would have conquered many a man who was less firmly “on the trail,” he sticks to it to the end of the line. There is picturesqueness and atmosphere galore in “Into the Light;” there is good strong drama and pathos and all that goes to make a successful photoplay. Little Jane Novak made such a hit in it that she was chosen for a very important part in “The Shepherd of the Mines” as leading woman for Hobart Bosworth. Watch for her work there. Here is the story of “Into the Light.” / Jane is surprised in the night by a burglar. She protects him from one of the neighbors, who was awakened by him, and, while she is saying a prayer for the salvation of his soul, he steals her jewelry. The next day she meets him by accident and is about to admonish when a policeman comes over, and she smilingly walks off. He is repentant, however, when he hears a Salvation Army sermon, and decides to change his mode of living. He leaves the city and becomes the village parson. Jane and her father decide to visit their ranch in Texas and while crossing the plain, they are held up by a bandit. The parson, driving past, saves them and recognizes the little girl who helped him. The parson is called by the bandit to offer the last rites to his dying wife, and while there he finds the bag full of gold which the bandit had stolen from the mill, and for which he is being sought as well as for the murder of the mill watchman. The parson gives him another chance, and allows him to make his getaway. He does so and while the parson is holding the bag of gold, the posse in search of the murderer enter and he is taken prisoner, accused of the murder. A verdict of guilty is brought in at the trial when the bandit, remorseful, rushes in and gives himself up to the law. He is thereupon exonerated and the following Sunday Jane joins him in the sermon. Love will find a way, and the picture comes to a happy climax.
Bruce Calvert
http://www.silentfilmstillarchive.com

I guess Stewart is not in the pic from INTO THE LIGHT, but he looks way older than he should in the still of FROM ITALY'S SHORE. He was only 32 at the time.

Users browsing this forum: No registered users and 18 guests