So, this morning a friend sent me this Facebook posting from something called Dave Heath: 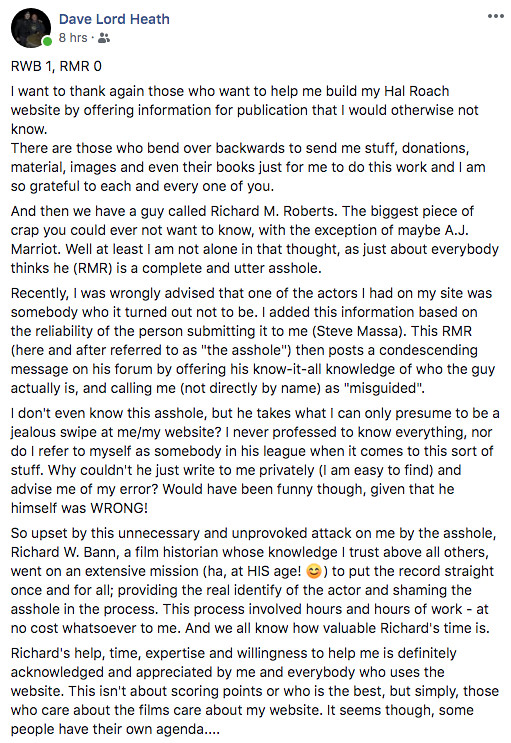 This is apparently the mafia posting that drove him into a tizzy:


Well, the interesting thing here is that I was not, in fact talking to Heath at all in putting up that posting, the “misguided film historians” I was communicating with were Tommie Hicks and Steve Massa, whom I wanted to point out the obvious problem without busting either of their chops about it. Why would I want to talk with this Heath creature? I have never had any personal contact with him in any way, but having looked at his site devoted to Hal Roach comedies, all I can say is he presents himself with the personality of your average soccer hooligan, and crybabies endlessly about other sites using his precious framegrabs without crediting him, framegrabs from films that he owns no rights to whatsoever, and far as I care to determine, many of which frames are grabbed off of DVD releases we have put out, or from old video transfers from prints from my collection that were given to him by others without my permission, yet he never credits us or gives any thank yous, making my reaction when I see him spitting and dribbling about these horrible things being done to him being something along the lines of the simple phrases, “too bad” and “so what?”

Why would I want to talk to someone who has equated watching most of these Hal Roach comedies to watching “granny porn” (his phrase, he must know what it is)? I don’t care how much one knows about Hal Roach comedies for me to talk to them, but I’d certainly expect someone to actually like them. I find it amusing to find someone bemoaning why I wouldn’t talk to him directly when any mention of my name I have seen on his site is the trashing of it by he and his cronies, none of whom have ever met or had any contact with me. Heck, paragraph three of his post answers his own question (interesting, a goodly number of the people I know, some of whom have even contributed to his site, tell me he’s an asshole).

I’m not even talking to him now, I’m talking to the rest of you about him, I leave him to his own paranoid self-absorption and anger-management issues, as well as some sort of attention deficit (pretty serious apparently, considering he ends his post with the words “This isn’t about scoring points or who is the best”…having also apparently forgotten that he began his tirade with the headline “RWB 1 RMR 0”).

Now, on to the other issue at hand:

Apparently Dick Bann has waded into the debate as to the identity of the black actor portraying the small parts(porters etc) in late 20’s-early 30’s Hal Roach comedies that has been attributed to Mathew “Tijuana” Jones and that I have attributed to as Spencer Williams. Dick went over to USC and dug through the Hal Roach records (he’s retired and he lives there, he has the time), and came up with the name of Hayes Robertson/Robinson, due to his being listed on a surviving call sheet from ONE OF THE SMITHS.

Here are some frame grabs from one of Hayes Robinson’s (as he is billed in the film) few actual-billed appearances in the 1927 Universal film WILD BEAUTY: 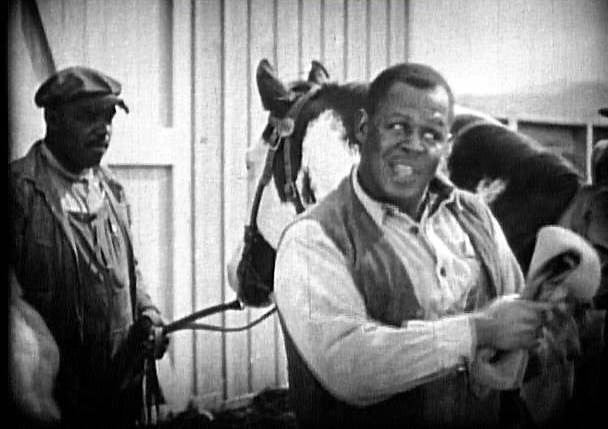 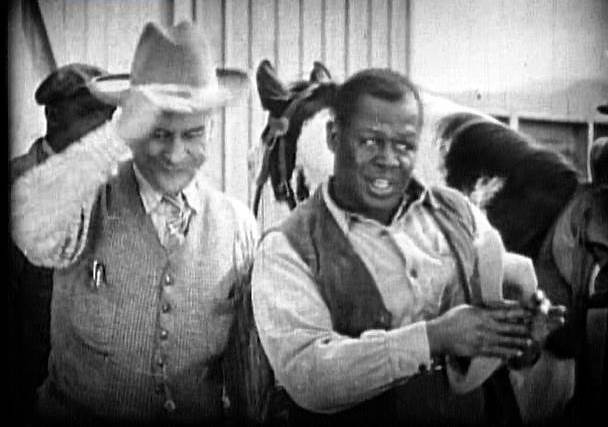 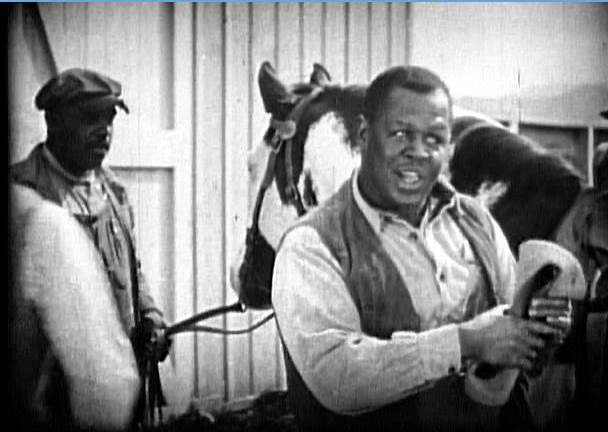 And I say I concur that Hays Robertson/Robinson appears to be the same fellow and stand corrected. It is apparently not Spencer Williams.

Undoubtedly this will cause big yipping, hooing, and hawing from this Heath and buddies, such is the norm for the sad, generally childish behavior of much of the film internerd crowd these days, but what it really registers is another simple reactive phrase, “big-deal” from all who actually have lives and have toiled in actually contributing something to film history. Everyone, from Kevin Brownlow or William K. Everson on down have been more than on occasion wrong in what they declare over the years, I have been studying Hal Roach and the Comedy Film Industry for fifty going on sixty years now folk, and I learn something new every day, and frequently correct myself. A lot of times one has to be wrong, but brave enough to declare an opinion, in order to find out the fact, either on one’s own or from someone else. This is a common occurrence in studying going on 100 year old films whose studios no longer exist and all the witnesses are dead, and it is the price one pays for all the good information we do generate, and how film history is uncovered.

I was in good company being wrong about Hayes Robinson, even Dick Bann hadn’t heard the name until he did the digging. What bothered the Heath bar is that the one thing I did know for sure was that it sure as hell wasn’t Mathew Tijuana Jones (and he sure looks a lot like Spencer Williams), and in the mistaken but unfortunately frequent belief of the film internerd (make that internerds and facebook folk in general) that it’s “all about them”, he convinced himself that it was an attack when no one was thinking or caring about him at all. We’ll continue that line of reasoning, the good news is that the mystery was solved, much like the Spencer Bell/Curtis McHenry mystery was solved, but that was with a nicer and saner group of film historians lacking axes to grind.

What else can one expect, these are the type of folk who will lift your information and not give you credit, but will happily excoriate you if you are wrong. More of the nonsense that is making one pull farther and farther away from this land of insanity and perhaps quit sharing anything with any of you if this is the thanks one gets. All for an area of interest whose numbers are small and shrinking and 99.8 percent of the World can care less. The fighting is so bloodthirsty because the stakes are so small, they’re not only re-arranging the deck-chairs on the Titanic, they’re fighting over who gets the couch. Forget what I said, you may not get that set in November………

Having been on the firing end of criticism myself (albeit generally not regarding writing about film), I find this kind of writing very therapeutic. One of my pet expressions is "Life is too short to be miserable". Richard, as the old saying goes, you've probably forgotten more about silent comedy than most people know. I know this will roll right off your back.

Also, I'm sure you were joking about withholding the Langdon Roach release. I'm already crying into my sandwich (and the apple I'll eat after now) over that possibility!

William Ferry wrote:Having been on the firing end of criticism myself (albeit generally not regarding writing about film), I find this kind of writing very therapeutic. One of my pet expressions is "Life is too short to be miserable". Richard, as the old saying goes, you've probably forgotten more about silent comedy than most people know. I know this will roll right off your back.

Also, I'm sure you were joking about withholding the Langdon Roach release. I'm already crying into my sandwich (and the apple I'll eat after now) over that possibility!

Users browsing this forum: No registered users and 17 guests