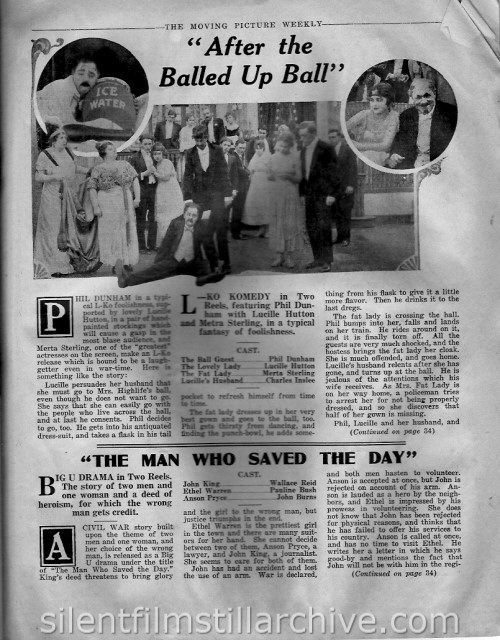 PHIL DUNHAM in a typical L-KO foolishness, supported by lovely Lucille Hutton, in a pair of hand-painted stocking which will cause a gasp in the most blasé audience, and Merta Sterling, on of the "greatest" actresses on the screen, make an L-Ko release which is bound to be a laugh-getter even in war-time. Here is something like the story:

Lucille persuades her husband that she must go to Mrs. Highlife's ball, even though he does not want to go. She says that she can easily go with the people who live across the hall, and at last he consents. Phil decides to go too. He gets into his antiquated dress-suit, and takes a flash in his tail pocket to refresh himself from time to time.

The fat lady dresses up in her very best gown and goes to the ball, too. Phil gets thirsty from dancing, and finding the punch-bowl, he adds something from his flask to give it a little more flavor. Then he drinks it down to the dregs.

The fat lady is crossing the hall. Phil bumps into her, falls and lands on her train. He rides around on it, and it is finally torn off. All the guests are very much shocked, and the hostess brings the fat lady her cloak. She is much offended, and goes home. Lucille's husband relents after she has gone, and turns up at the ball. He is jealous of the attentions which his wife receives. As Mrs. Fat Lady is on her way home, a policeman tries to arrest her for not being properly dressed, and so she discovers that half of her gown is missing.

Phil, Lucille and her husband, and the fat lady, all return to the apartment house where they live. Phil has a hard time finding his door. He enters Lucille's room by mistake. Then ensues a general mix-up with everybody in the wrong room

The police are called, and chase Phil to the roof. Lucille's husband follows them, shooting madly. They all run around the edge of the roof and down the fire escape. Phil takes a bicycle from an old man, and Lucille's husband chases him in a Ford. The chase takes them all to a pier and they end up in the water.

Users browsing this forum: No registered users and 2 guests