This is an original flyer from the Silent Movie Theater, 611 Fairfax in Hollywood, dated March 23, 1993.
Come back, Silent Movie. Come back. 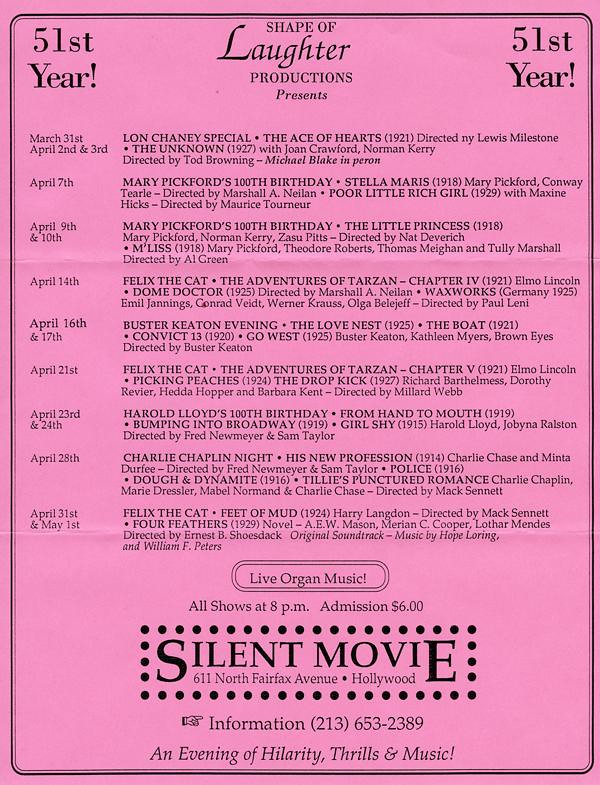 That's from the Larry Austin era, not an "original" anything. John Hampton would be the original and only. Once Austin had got his oily mitts on it, The 'real" Silent Movie Theater was already a thing of the past.

I cannot argue your point, Richard, the Hamptons were indeed the real McCoy.
That said, I would take the Austin era over nothing at all, which is pretty close
to where we are now -- there is precisely one silent film on the current schedule.

Oh the memories, when the Silent Movie Theater regularly played silent comedies every week. I also remember these flyers and was a regular at the silent comedy nights. That's where I first saw THE GOAT and SAWDUST BABY on one of the comedy nights.

I use to believe I periodically attended showings at that theater during my four years I lived in LA. Now I read that the Hamptons shut down the place in 1979. I moved out there in the fall of that year. I guess my 'attendance' just consisted of driving by the empty building and looking in.
Funny how time plays tricks with the mind.
Gary J.
http://www.facebook.com/profile.php?id=1783165551
Post Reply
6 posts • Page 1 of 1