I see that they are listing the Hallroom Boys comedies as being "suspended" since the boys are off on that vaudeville tour.

I also note the start of filming of Raymond Griffith's RED LIGHTS. I saw this some years ago at a Cinecon but wouldn't mind seeing it again.

Joe, here's something to whet your appetite... 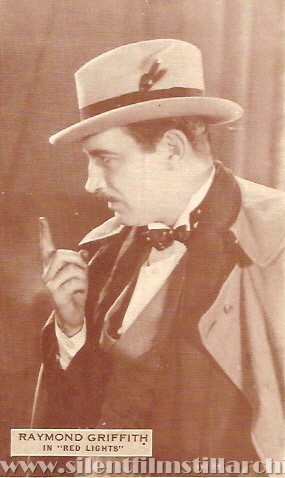 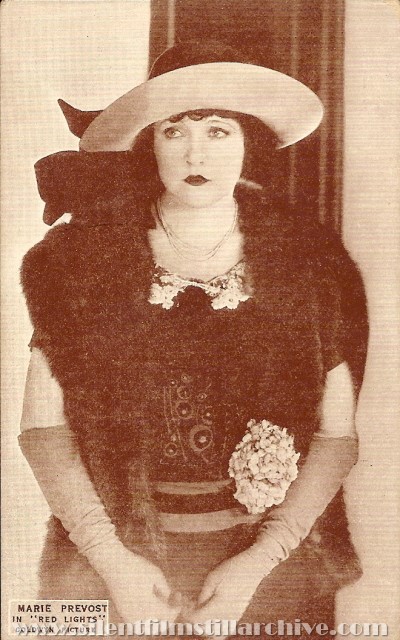 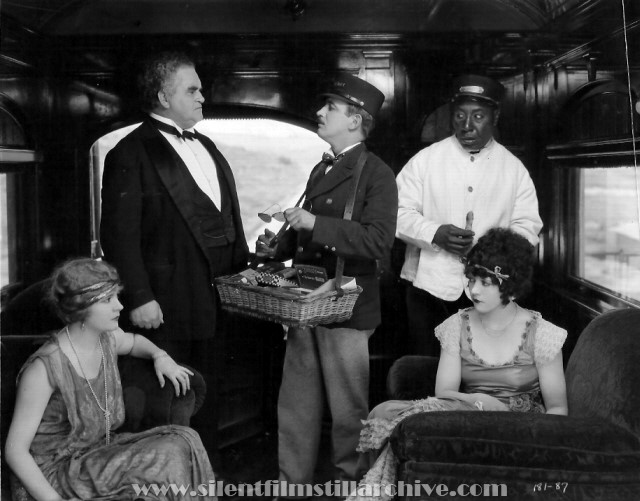 Caption: The train butcher proves to be none other than the crime deflector. Alice Lake, Lionel Belmore, Raymond Griffith, George Reed, and Marie Prevost.

Thanks for posting the great stills from RED LIGHTS!

This is how I look with glasses but I don’t wear them.
(Photo of mousey-faced mustached man with a hat and tie)
This picture really does not do me justice.

Just finished playing “The Dummy” with Hart Schaffner & Marx
Am very familiar with the motion picture business having been in it before it was in its infancy.
WILL NOT consider position to direct “Ben Hur.”
I write the “Exhausts” column for Camera! And would consider job with salary attached.
Have been offered several engagements, but the money didn’t come from the east.
My hobby is to work in the motion picture industry.
I can swim, dance, roller-skate and grow a beard.
Will work for anyone but Billy West.
Phone 578-097
ATTENTION CREDITORS:
Please don’t phone, but send my bills to my new address, 1340 Milton Ave.
(Camera Vol. 5 No. 42 pg. 23)

It's times like these that I wish I had a working scanner because CAMERA doesn't usually run too many pictures but occasionally they do have one that I'd like to post, such as this picture of Al Martin. Maybe then some of you guys who are good with matching faces could start spotting him in these roles he refers to. I wonder what's up with his attitude toward Billy West too?

“The Plum Centerpedes” finished, on Saturday, the twelfth and last Plum Center comedy at the old Gerson studio on Tenth Street. Dan Mason, star of the company, his daughter, and Wilna Hervey leading lady, will leave for New York about Feb. 1st. It is possible that a second series of Plum center comedies may be made here later on.

JACKIE COOGAN-MILLIONAIRE
To amass a fortune of over a million dollars through his own ability and efforts before his eighth birthday, is the remarkable record made by Jackie Coogan, filmdom's king of baby starlets. As a result of his signing a contract with the Metro organization, Jackie received a cash bonus of $500,000, and will further receive a sixty percent share of the earnings of the four pictures he will make for this concern during the next twelve months. By terms of the contract Mr. Coogan Senior will have the privilege of picking the stories and casts for his youthful celebrity, and will personally supervise each production.
(Camera Vol. 5 No. 42 pg. 20)

Who’sWho and What’s What in Filmland This Week

You're not missing much. I saw it at Capitolfest and found it to be awful. In fact, Griffith was probably the only reason I stayed in my seat throughout the picture.
www.louiedespres.com
www.elbrendel.com/

John Aasen, of Minot, North Dakota, who is eight feet, nine inches tall, and the most gigantic giant in the world, has joined the Hollywood film colony and will appear in Harold Lloyd comedies. If he scores any kind of success as a photo-player, Aasen is bound to be a big success. (Camera Vol. 5 No. 42 pg. 15)

For the Week Staring Monday January 29

The Lloyd unit continued work on WHY WORRY?

The Pollard unit continued work on THE COURTSHIP OF MILES SANDWICH. This was the last of Snub's two-reelers to go into production.

The Paul Parrott unit finished some retakes on GET YOUR MAN and then did some additional shooting on his current picture, GOOD RIDDNACE.

The Our Gang unit continued it's shooting of DOGS OF WAR.

Shooting began on the Stan Laurel picture UNDER TWO JAGS.

I should have noted in last week's CAMERA entry that shooting on the first Rex feature, KING OF THE WILD HORSES, had gotten underway on January 27th. It would continue, off and on,until January of the following year.

I also note, with interest, that the canine star of THE CALL OF THE WILD, Buck, is listed here as "Buck" Parrott which makes me wonder if he belonged to either Charles or James Parrott? Anyone know?
Jack Mulhall was the human star of the picture with Walter Long, Sidney D'Albrook, Laura Roessing and Frank Butler in support. These later three would all be regulars in Roach's Spat Family series which would begin production in a few months.
Director Fred Jackman's younger brother, Floyd Jackman, was the film's cameraman. Both Jackmans did a fair amount of work for Roach in the silent era.
Since the film is PD and extant I've always been surprised that Roach's version of THE CALL OF THE WILD hasn't popped up on video/DVD. Anyone here ever seen it?

Well, with these Roach Studio listings, that wraps up this issue of CAMERA Comedy Clippings. I'll be back next week when I start posting the clippings from the December 31, 1921 issue.

Users browsing this forum: No registered users and 5 guests